You are here: Home1 / Blog2 / General3 / LPG Knowledge4 / Can I use LPG to become independent of natural gas (CNG or LNG)?

April 2022: a war between Russia and Ukraine continues to rage. Some countries have imposed sanctions on Russia, as a result of which natural gas prices have risen sharply once again. A discussed gas embargo from Russia could also endanger the supply reliability of many households and industry. Many are looking for alternatives. Is LPG such a solution? Can I use it to operate my gas stove? Can I use LPG instead of natural gas?

Before we begin: unfortunately, these seemingly simple questions are not so easy to answer, but most likely with: it depends! First of all, however, we should clarify whether LPG can continue to be supplied at an affordable price. Or is LPG facing similar uncertain times as natural gas in Europe, especially Germany?

By now, at least, everyone is aware that Russia has us on the ropes with Compressed Natural Gas (CNG), conventional natural gas. However, this is not the case with liquefied petroleum gas (LPG). Most of the LPG comes from German refineries. In most cases, LPG imported into Germany comes from EU countries, Scandinavia or the USA. More information on the origin and properties of LPG can be found here:

Germany imports a relatively small share from Russia. According to a press release by the German LPG Association (DVFG), experts would assume that Germany could compensate for the loss of imports from Russia by other sources.

Jobst-Dietrich Diercks, CEO of the DVFG, summarises this as follows: “The supply of liquefied petroleum gas (LPG) to Germany is internationally diversified and thus permanently secure!”

It is therefore likely that the supply reliability with LPG will be permanent, what about price stability? In the wake after the rise in the price of natural gas, LPG has also become increasingly expensive, as has pretty much every form of energy since 2021.

Currently, 650,000 households in Germany use LPG, especially in rural areas. Those who live far from the natural gas network in detached houses or flat blocks, but still want to heat with gas, rely on LPG. In these cases, an LPG tank is in the garden or buried in the ground.

However, a supposed “weakness” in heating with LPG proves to be a plus for many in these times of crisis. LPG does not come from the grid, but is stored in a tank. An LPG tank owned by the individual increases the purchase and operating costs, but guarantees autonomy and independence in the heat supply – for a certain time, at least. In addition, a storage option like this basically allows you to buy energy to a high degree when it is relatively cheap.

Independence from and compensation of price fluctuations – two major factors that are currently increasing interest in LPG. But what are the specific cases in which LPG can be used in heating instead of natural gas? 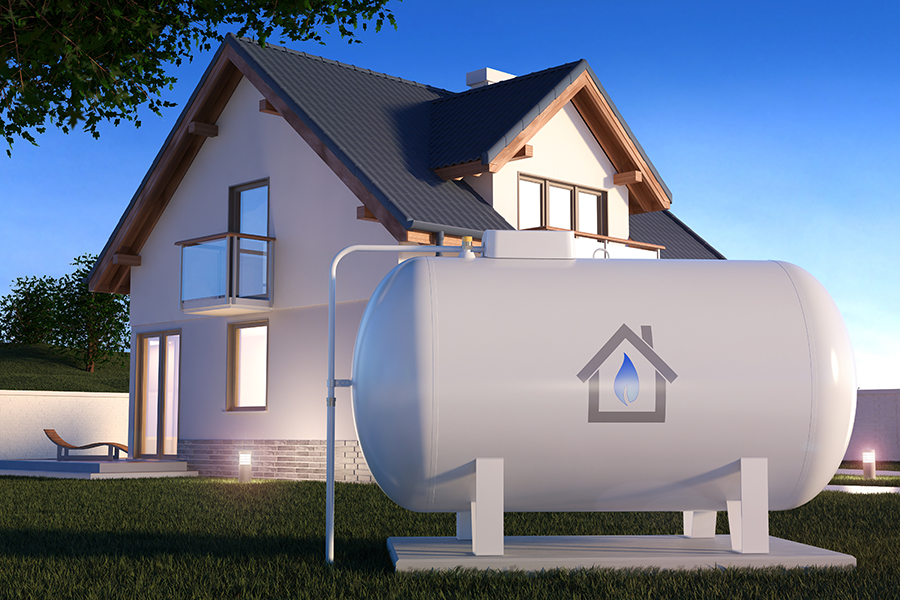 An LPG tank in the garden can give you a certain type and degree of independence. An alternative to natural gas is definitely LPG, but it depends on the application.
©Studio Harmony – stock.adobe.com

Switching from natural gas to LPG

Of course, it is possible to have the existing connection separated from the natural gas network, to buy or rent an LPG tank, to put it in the garden and to have it connected by an expert. It’s clear, however: this is costly and is probably only a serious alternative for those who fear a gas embargo and the associated supply shortage. Theoretically, you can also buy an LPG tank and have it placed in the garden without being connected – in case of an emergency. LPG suppliers have already told us about similar requests.

Anyone who thinks about such an alternative will surely ask the question: can the gas boiler/gas condensing boiler be operated with LPG instead of natural gas? According to our research, there is usually the basic possibility with newer devices, since the manufacturers design the devices for both media. The supply of a different medium is only a matter of adjustment there. However, we cannot make this general statement here, as we could not check every manufacturer and every device.

Whether you are using a new or a slightly older device, this is very important: if you are considering changing the energy source, please make sure you know beforehand whether the device used at your home can do this and speak to a specialist company!

GOK in your system?

We as GOK are inseparably connected to the medium LPG. We have made a name for ourselves in recent years, particularly in the leisure sector, as we manufacture regulators and LPG fittings for gas grills, motor caravans and caravans as well as boats.

Although these topics are generally more visible, a large part of our business is in the field of energy and heat supply. Among other things, we manufacture the “heart” of LPG systems for heating residential buildings: the so-called double-stage tank regulator, i.e. a pressure regulator/pressure reducer. This ensures the constant supply of LPG to the gas heating system in a defined stable pressure range. On our website you will find further information about products and tank systems in general.

But don’t worry: as a consumer, you do not have to work out which is the right pressure regulator for your application. If you choose an LPG system, the LPG supplier selects the components that match the system and tank.

Among other things, GOK manufactures pressure regulators and shut-off fittings for LPG systems, for instance.

Gas cylinders are indispensable for barbecuing with gas or for caravanning and camping. Thanks to the boom of recent years in both areas, LPG is becoming more and more familiar to people. The question is obvious: can I also operate my gas heating via gas cylinders?

Anyone who has no space or simply does not have the necessary cash for their own tank, yet wants to heat with LPG instead of natural gas, will have at least thought about the use of LPG cylinders. While for barbecues or in motor caravans or caravans, mainly cylinders with a filling weight of 5 kilograms or 11 kilograms are used, purely theoretically, only the 33-kilogram gas cylinder is interesting when it comes to heating. But is it really?

According to Knauber Gas, an average household in Germany uses between 2,000 and 3,000 litres of LPG per year. One kilogram of LPG is equivalent to about two litres. This means: about 60 litres of LPG are stored in a 33-kilogram cylinder. This alone should show that even a multiple cylinder system does not represent a direct one-to-one alternative to the LPG tank for all households.

However, anyone who wants to take steps to prevent the worst-case scenario of the shortage of natural gas supply, but who cannot or does not want to bury a tank in the garden, can at least talk through a multiple cylinder system with the specialist company. Parallel to the natural gas connection, the contractor could place an alternative connection from the cylinder system to the gas heating system and, if necessary, connect it finally. With several full gas cylinders you can cover your needs for a few days, maybe weeks. However, this is no more than a safeguard for particularly bad times. 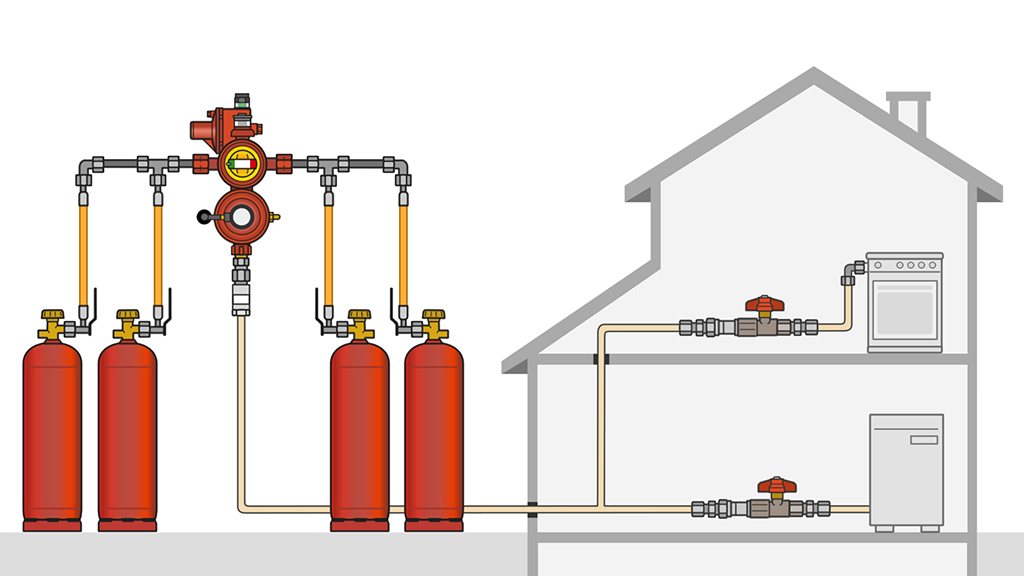 In principle, a multiple cylinder system with LPG can also supply heat. Compared to an LPG tank, however, the cylinders have to be replaced often and overall the costs are higher.

We have also heard from recent conversations from consumers who are thinking about reactivating their old LPG tank. This is an alternative for not that many households and very important: the system should always be inspected by specialist personnel.

Operating your gas stove with LPG

In many households, the gas cooker and/or the gas stove is operated via the natural gas connection. Anyone who fears an interruption in supply has probably already looked at whether the gas stove can also be operated with LPG. According to our research, this is feasible in principle for most manufacturers. Some even offer a conversion kit ex works including suitable nozzles, to allow consumers to operate the gas stove with LPG as well.

If you are considering a conversion, please find out more in advance. It is easy when you buy a new gas stove. Often you will find information directly in the product information of the dealer or the manufacturer.

If you already have the gas stove in operation, look for a pack with nozzles for converting to LPG. As already mentioned, some manufacturers already supply such nozzles ex works. If you are unable to find a conversion kit, dealers and manufacturers often have relevant information on their websites.

What should I pay attention to when installing and operating a propane-powered gas stove at home?
Which LPG cylinders can I use inside buildings?

Important: no matter whether you need a new connection or a retrofit, let a specialist carry out the work! 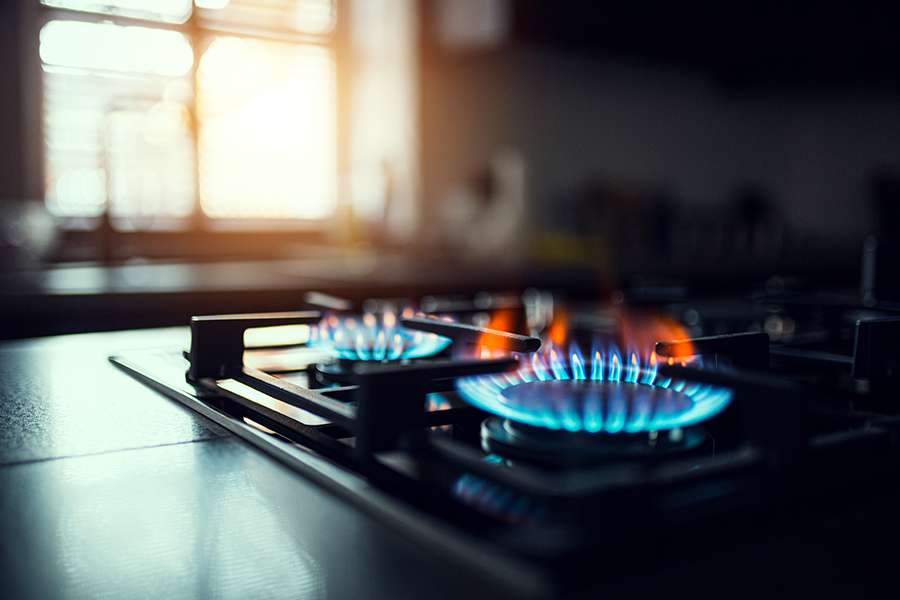 Many gas cookers and stoves can be operated with natural gas (CNG) as well as LPG. However, there are details to consider!
©Meurer Photography – stock.adobe.com

Basically, there are a few ways to substitute LPG for the natural gas supply. Whether or not it is a useful option depends on a number of factors, not least on your own desire for supply reliability in an emergency. With this article, we do not want to fuel hysteria or advise consumers to cut off the natural gas connection and switch to LPG wherever possible. We simply want to show whether and in which areas LPG is suitable as an alternative.

For heating and cooking, you can be certain: under certain conditions, LPG is definitely an alternative to natural gas. However, the consumers must ultimately decide for themselves whether the changeover is worthwhile or makes sense.