You are here: Home1 / Blog2 / General3 / LPG Knowledge4 / Will liquefied petroleum gas (LPG) be affected by the imminent shortage...

There have been many reports in the media all about the shortages of gas. But not all gas is the same. It is clear from the reports that the current context of the gas shortages refers to natural gas, for example. Despite this, however, it is still worth asking whether there is likely to be a shortage of liquefied petroleum gas (LPG).

It is clear that the Russian Federation has been reducing the amount of natural gas coming into Germany through pipelines. If their heating system uses natural gas, many people who own or rent their home are facing a harsh winter. This has naturally been taken up and reported about very widely in the media. Unfortunately, it has also meant that all gas types have been “tarred with the same brush”, though.

Misrepresentation in the media

In the “Tagesthemen” evening news programme which was broadcast on 22 July 2022, the effects of the conflict in Ukraine were discussed. The discussions naturally turned to natural gas, but the news editors made a mistake. While Ingo Zamperoni talked about CNG, or compressed natural gas (i.e. standard natural gas), a tank for LPG was shown in the background. Although it was a relatively minor and inconsequential mistake, reporting of this kind can create confusion among consumers.

Security of supply for LPG

Let’s start by providing clarification: liquefied petroleum gas (LPG) is available in more than adequate quantities, both for now and the foreseeable future. The supply of LPG is much more widespread than natural gas. LPG is supplied by both German refineries (which are actually the majority) as well as EU countries, Scandinavia and the USA.

As regards Germany, the German Association for Liquefied Gas (the DVFG) summarised the situation and the outlook in a press release in April 2022. The press release provided the following information:

In 2021, 3.7 million tonnes of liquefied petroleum gas (LPG) were consumed in Germany. The most important source of supply for LPG is German refineries. 1.5 million tonnes were imported, more than 90 percent of which was from EU countries, Scandinavia and the USA. The deliveries go to the five German import terminals along the river Rhine, and mainly arrive from Holland and Belgium by ship and rail. The Brunsbüttel seaport terminal also gets LPG from international sources.

Can I use LPG to become independent of natural gas (CNG or LNG)? 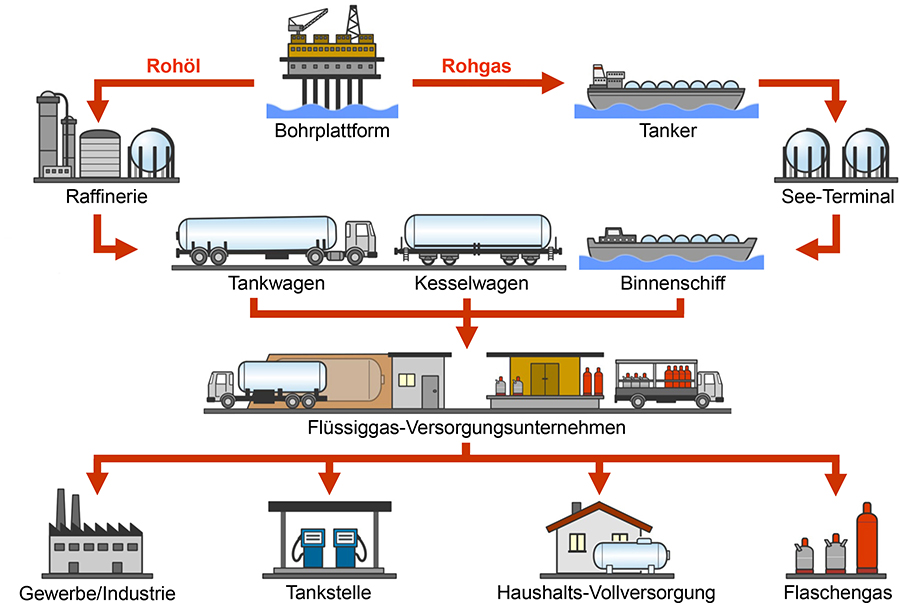 LPG is produced during the production of crude oil or natural gas and as refinery gas. As its supply is far more diversified, there is no risk of a bottleneck.

Relevance for households and industry

LPG has a wide range of applications in households and industry. Both private individuals and restaurant-owners have stoves or hobs that use LPG. And both residential and commercial properties are heated with LPG. In the case of these applications and similar ones in particular, consumers often require high quantities of LPG. Yet this poses no problems for the large-scale distributors of LPG, both right now and for the approaching winter.

LPG is of particular interest as a mobile form of energy. LPG can be compressed relatively easily and stays liquid at room temperature under comparatively low pressure. In its gaseous state, however, LPG has a far bigger volume.

This is one of the reasons why LPG in cylinders is especially popular with both campers and vehicle manufacturers. In the vast majority of motor caravans and caravans, LPG is the preferred form of energy for the operation of hobs, heaters or barbecues.

Campers don’t have to worry about their summer, autumn or winter holidays being cancelled because there aren’t any “gas” reserves, however. Gas cylinders only contain LPG and, as explained above, LPG has nothing to do with natural gas or liquefied natural gas. 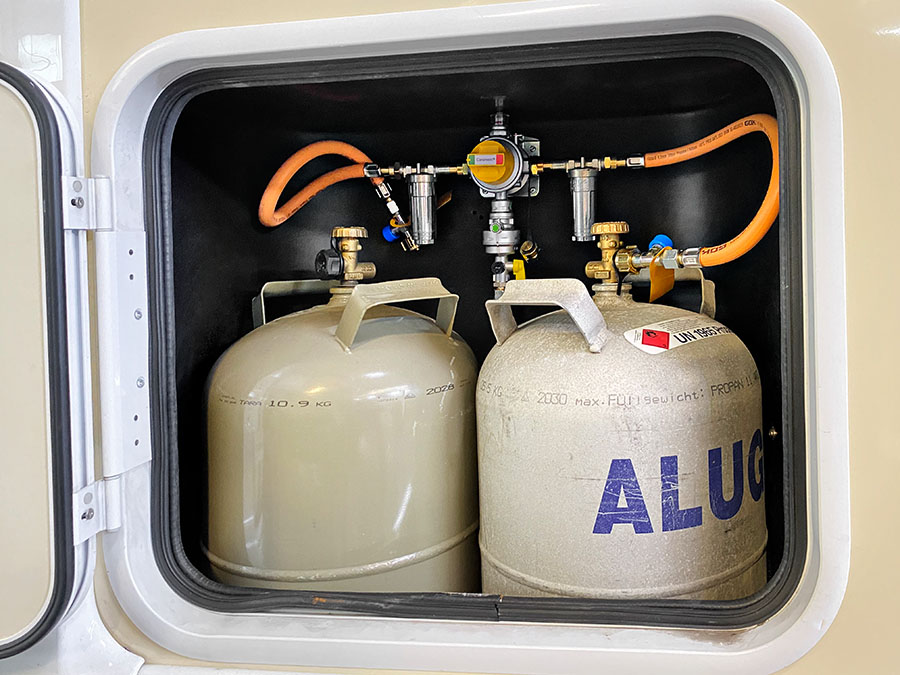 Campers don’t have to worry. There is enough LPG for operating gas heating systems, gas hobs and gas-powered barbecues.

Even if the pipelines from Russia shut down completely, LPG will continue to be available for applications such as gas-powered barbecues. 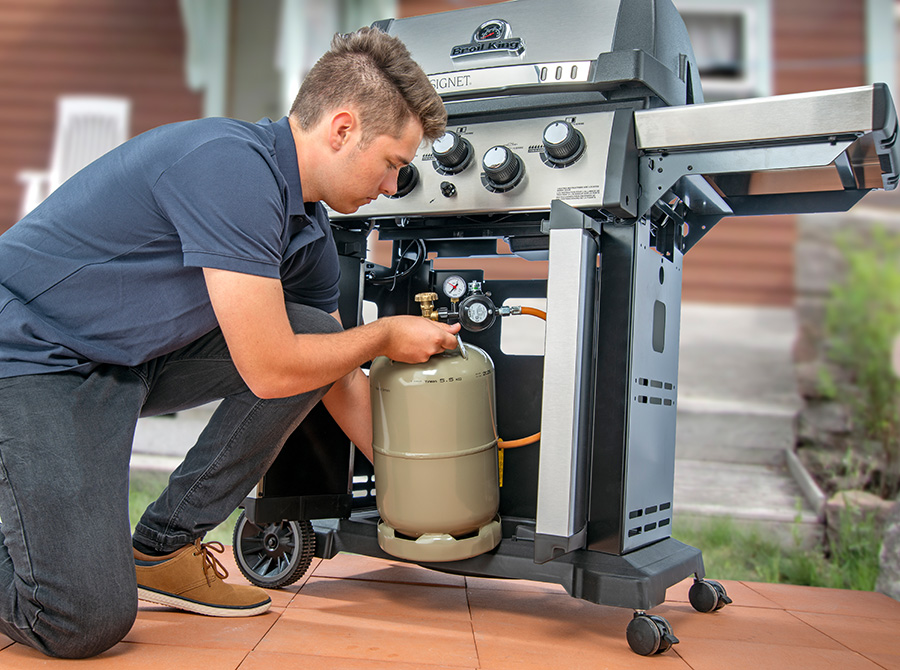 An image without rarity value: sufficient volumes of liquefied petroleum gas (LPG) are available now and in the future for the operation of gas-powered barbecues. The imminent shortage of natural gas will have no impact on the supply volumes of the medium of LPG.

How long can I barbecue for with a gas cylinder?

There is, however, a current risk of inconvenience for anyone who does not currently have an LPG cylinder, whether that means a returnable cylinder or a cylinder that they own. Unfortunately, there have recently been cases in which the LPG delivery points have had to stop issuing new cylinders. Only those who have been able to return an empty gas cylinder for a new one have been able to take a full cylinder home with them.

The reason why: consumers who aren’t so well informed have been under the impression that LPG would also be affected by the imminent gas shortage, so they have been hoarding gas cylinders at home. We have already explained that this is, quite simply, wrong. There is no need to discuss the morals of the matter.

When “gas” is discussed in the context of the conflict with Russia, this generally always means natural gas. In English, natural gas is “compressed natural gas”, which is abbreviated to CNG. In Germany, many houses and apartments are connected to the natural gas network and get their gas from suppliers.

Germany gets a large proportion of the natural gas that it needs from Russia. The gas comes in gas lines that start in Russia. The pipelines are called Nord Stream. As the conflict with Russia continues, efforts are under way to secure alternative sources of natural gas.

In this context, much is being made of the possibilities offered by liquefied natural gas (LNG). In this context, the potential for confusion with LPG is considerable, as both are liquefied gases but nevertheless completely different. After it is supplied, LNG is processed, liquefied and cooled down to -162 degrees Celsius. LNG arrives at special terminals via ship. The liquefied natural gas is stored at the terminals. Depending on the requirements, the LNG in storage is transferred to smaller tankers or, after conversion into its gaseous state, transported to distribution centres or straight to the gas supply companies.

Instead of getting natural gas through pipelines from Russia, Germany is working on solutions for importing more liquefied natural gas via shipping tankers and LNG terminals – as shown here.
© Wojciech Wrzesien – stock.adobe.com